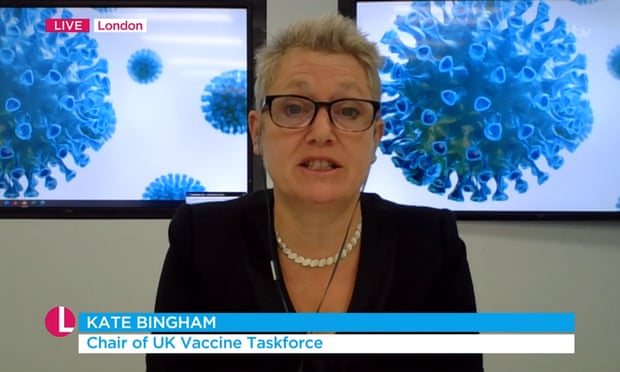 The head of the government’s vaccine taskforce faces fresh questions after it emerged she hailed the launch of a biotechnology investment fund in her capacity as managing director of a venture capital firm despite having “stepped away” from the role.

Kate Bingham, a venture capitalist married to the Conservative minister Jesse Norman, came under scrutiny this week when Labour asked the cabinet secretary to “undertake an urgent and swift investigation” after it was claimed she showed US financiers government documents at a $200-a-head conference.

She has garnered further attention after the Times reported that, although Bingham voluntarily declared that SV Health Investors “does not invest in companies related to work on the Covid-19 vaccine”, it has shareholdings in companies named Alchemab and Adimab, which have been involved in the race to develop antibody cocktails.

Separately, in a press release from July – weeks after Bingham was appointed to the role by Boris Johnson in May – she said SV Health Investors was delighted that its first biotechnology-focused fund had attracted significant support.

“With many organisations working in unison to achieve the UK’s mission of maintaining a leading position in precision medicine, this felt like the perfect time to launch the IMF,” she said.

“As with our other funds, the IMF team will work closely with our portfolio companies to maximise the fund’s potential to transform healthcare and contribute to the UK’s mission.”

The shadow health minister, Justin Madders, told the Guardian there was an “extremely concerning pattern of what looks like a cavalier attitude towards the normal standards of probity” and called for greater scrutiny.

“We need a complete examination of who is involved here to ensure decisions are being made in the best interests of the UK taxpayer,” he said.

“We also need clarity about what is meant by Bingham ‘stepping away’ from her role at SV Health Investors and what safeguards will be in place when she steps down from her role in the taskforce  at the end of the year.”

A spokesperson for the Business, Energy and Industrial Strategy Department (BEIS) said: “Kate Bingham resigned from Alchemab and stepped away from her role at SV Health Investors before she took up her role on the vaccines taskforce.

She therefore no longer has knowledge of or influence on the operations of Alchemab or Adimab.” The spokesperson also said neither Alchemab nor Adimab had any interests in the vaccine tender.

Bingham is not bound by transparency rules or the parliamentary code of conduct on declaring interests since she is an external appointee, but she reports directly to the prime minister and there have been longstanding calls from many commentators for such appointees to be subject to parliamentary standards.

On its website, SV confirms Bingham’s role as vaccine chief is a six-month posting and that she remains its managing partner.

The news comes after it emerged that the UK’s chief scientific adviser, Patrick Vallance, has a £600,000 shareholding in GlaxoSmithKline, the pharmaceutical giant contracted to develop a Covid-19 vaccine for the government.

He was criticised for not prominently disclosing the interest, but the government said Vallance had no input into contractual and commercial decisions on vaccine procurement and that his shareholding had been declared on the register of interests on the government’s website since he took up the position of chief scientist.

• This article was amended on 8 November 2020 to clarify the criticism of Patrick Vallance with respect to his shares in GSK, and to include the statement that his shareholding was declared on the register of interests.