The lockdown rebels preparing to defy No 10 on Covid restrictions. 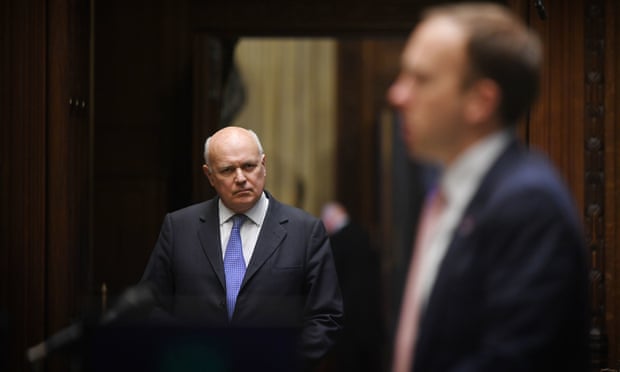 As England braces for a second national lockdown, Downing Street once more faces a rebellion over tougher restrictions. Ahead of a Commons vote on Wednesday, several Conservative MPs are weighing up their options. Here are some key figures who may line up against the government and the broad camps they sit in, alongside Nigel Farage and his plan for a new anti-lockdown party.

Sir Graham Brady
The chair of the influential 1922 Committee of backbench Tory MPs is again a thorn in the side of the government, urging Boris Johnson to publish a full impact assessment on the costs and benefits of another lockdown. “We need clarity as to the years of life that will be lost or saved, the impact on mental health and the consequences for quality of life,” he wrote in the Daily Telegraph.

Brady, who successfully spearheaded a rebellion ensuring parliament got a vote on new nationwide restrictions before they are imposed, says any return to regional tiers or an extension of lockdown beyond 2 December must be approved in advance by MPs.

Reflecting on restrictions over the past seven months, Brady added: “If a totalitarian regime sought to tell people with whom they are allowed to have sex (you must be in an established relationship), whether you are allowed to visit your parents, or which categories of workers are allowed to provide for their families, we would denounce it as intolerable evil.”

Sir John Redwood
The former Conservative cabinet minister has publicly questioned what the exit strategy is for lockdown. Tweeting on Monday, Redwood said: “The proposed lockdown will be damaging to livelihoods and business. The government should work with business to allow more to stay open … Why won’t the government advisers and NHS management give us believable forecasts rather than hugely wide and some wild illustrations of worst cases? Where are the accurate figures for NHS bed occupancy? How do they now define a CV 19 death?”

Iain Duncan Smith
The former Tory party leader believes England should have kept with the regional tiered lockdown strategy. “Trying, as far as possible, to keep the economy open whilst focusing on those areas with the highest infection rates wasn’t a perfect solution, but it kept people’s hopes up. Now those hopes have been dashed,” he wrote for the Daily Mail.

“I still feel, after seeing the Sage data, that we should have stuck with this plan – even increasing, if necessary, the levels of action in specific areas, as is now happening in Scotland. It seems harsh to punish the whole of England when many areas could be at tier levels which might well bring this under control.”

Regarding Wednesday’s vote, he said: “I will need to be certain that the data is fair and accurate, leaving no other alternative, before supporting such a drastic step as full lockdown.”

Peter Bone
The veteran backbencher said the government’s localised approach to lockdowns “made a lot of sense”, telling the BBC: “Lock down in areas where the disease is very bad, but not in other areas – don’t wreck other areas where it’s not necessary. And I’m not quite sure why we’ve abandoned that, because there’s lots of areas in the UK which don’t have a problem at the moment.”

Bone, who has not decided how he will vote on Wednesday, highlighted concerns about another lockdown and called Brady’s suggestion that an impact assessment be published “very sensible”.

Nigel Farage
The most openly anti-lockdown political voice is now coming from the former Ukip leader, who announced on Monday he was rebranding his later vehicle, the Brexit party, as Reform UK with an initial plan to seek an alternative path on Covid.

In a Telegraph article this weekend, Farage formally supported the Great Barrington Declaration – the proposal from an international group of scientists to allow younger and healthy people to return to normal life, while shielding the more vulnerable.

This has been disparaged by many epidemiologists, who say the idea of achieving “herd immunity” without a vaccine is unrealistic, not least given the doubts about how long Covid immunity lasts. With a general election years away, Farage seems likely at some point to rebrand Reform UK as a more general rightwing populist party, focusing on areas such as immigration, crime, and culture-war issues.

Esther McVey
The former cabinet minister has come out against a new lockdown, saying she will vote against the measure on Wednesday. McVey wrote on Instagram: “The ‘lockdown cure’ is causing more harm than Covid. The world can not be put on hold, and the government must stop pressing the pause and stop button for the whole nation on a whim, with all the disastrous effects this brings to our lives, livelihoods, health and relationships.”

The lockdown rebels preparing to defy No 10 on Covid restrictions.