LONDON (Reuters) – COVID-19 infections are rising so persistently in the United Kingdom that unless something can be done to reduce infections, the “reasonable worst-case” scenario of 80,000 dead could be exceeded, scientists said on Friday. 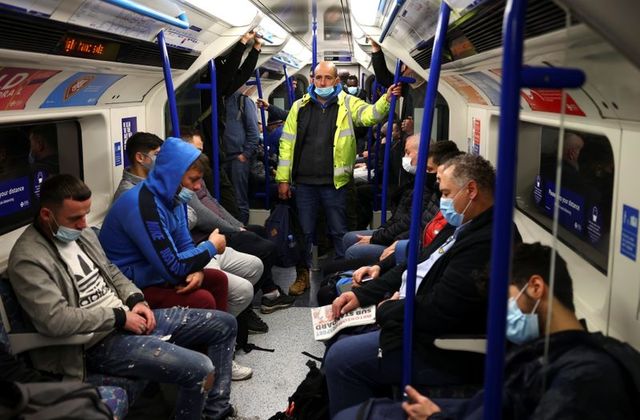 Britain has recorded more than 20,000 new coronavirus cases a day on average over the last week, but the government has resisted a new national lockdown even as France and Germany reintroduce country-wide restrictions.

British government scientists said that numbers were heading in the “wrong direction”.

They said the “reasonable worst-case” planning scenario for the winter of reaching 500 deaths a day and a toll of over 80,000 is in danger of being exceeded unless infection numbers are cut, according to papers published by the government’s science advisers on Friday.

In the paper, dated Oct. 14, advisers said that the exceeding of the worst-case scenario might continue for three or four weeks if infections were brought down. But since then, they have risen further.

New COVID-19 cases in England increased by around 51,900 each day last week, up nearly 50% on the week before, an official survey said on Friday. [L8N2HL5C2]

That suggested that the incidence of new infections was still rising steeply and had not levelled off, in contrast to the previous week’s survey.

“The UK was one of the hardest-hit countries in the world in the first wave. It would be particularly tragic if we repeat this experience,” Professor James Naismith of the University of Oxford said, adding that the figures suggest 1% of the population of England had COVID-19.

Though the dip in reproduction “R” number showed that local measures were having an effect, government scientists caution that numbers of infections will not fall unless it is brought below 1.

Foreign minister Dominic Raab said on Friday said a national lockdown in England was not inevitable as he restated his faith in the government’s localised approach.

“We’ve seen some evidence since we started putting in place this tiered approach that the rate of increase has slowed,” Raab told BBC TV.

Adding to Prime Minister Boris Johnson’s headaches, a poll by Ipsos MORI indicated falling support for the government. It found that the opposition Labour party had overtaken Johnson’s Conservatives, with Johnson himself recording his lowest net satisfaction as prime minister.

This news story was published by Reuter. Click here to read the original article.

LearnPac Systems is a leading UK provider of accredited online training courses, programmes and qualifications. Contact our Support Team on 024 7610 0090 or via Email to discuss your online training.