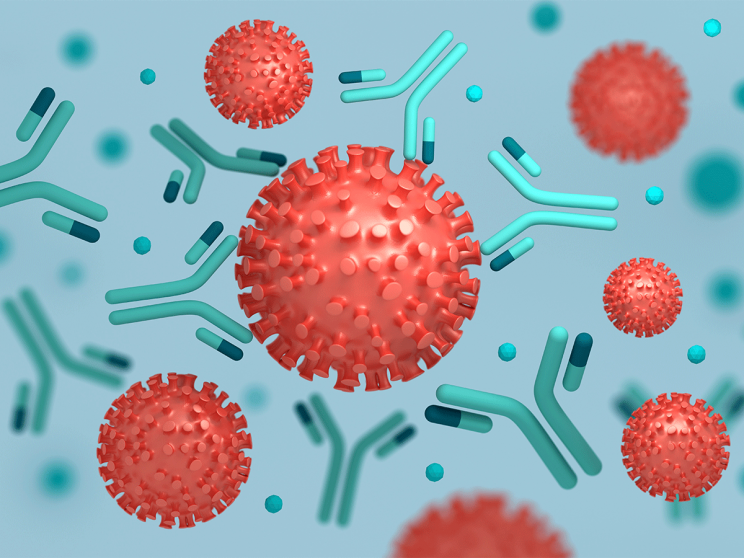 LONDON – Three large scale population surveys conducted between late June and the end of September have shown the prevalence of SARS-CoV-2 antibodies in England declined by 26.5% over three months.

The findings rest on the results of more than 350,000 self-administered lateral flow blood tests that were carried out at home by volunteers who were randomly selected from general practitioner registers. Of these, 17,000 had positive antibody tests.

“There is a very clear fall in the proportion of people in the study with detectable antibody over three months. So at the start of the second wave of infections in early September, only 4.4% of the population had detectable antibodies,” said Graham Cooke, professor of infectious diseases at Imperial College London, and researcher on the REACT (REaltime Assessment of Community Transmission) study. “This suggests the possibility of decreasing population immunity and increased risk of infection,” Cooke said.

There are many potential ramifications of the results, ranging from the need for continued social distancing and other public health control measures, to what they may portend for COVID-19 vaccines.

The third survey was completed as a second wave of COVID-19 infections kicked in. The low level of protective antibodies means “a lot of people will still be susceptible to infection,” said Paul Elliott, director of the REACT study and chair in epidemiology and public health medicine at Imperial College. “That is reflected in the rising number of cases,” Elliott said.

The study indicates that in common with other coronaviruses like flu and rhinoviruses that cause the common cold, SARS-CoV-2 may be able to reinfect people, according to Wendy Barclay, professor of virology and head of the department of infectious diseases at Imperial College. “We still don’t know what level of antibody is needed to protect from infection, or reinfection from SARS-CoV-2,” Barclay said. “Seasonal coronaviruses can reinfect people after six to 12 months, and we suspect the body’s immune response to the new coronavirus is similar.”

It is, of course, to be expected that antibodies would wane after the body’s initial response to infection, but said Barclay, “the rate of decline, and the final nadir, is different in different pathogens.” Understanding what level and what kind of antibody response is required in the case of SARS-CoV-2, is “critical in determining future protection,” she said.

It also is unclear at the moment what role T cells play in immunity, and if they are effective in the absence of antibodies. “It is possible T cells protect from reinfection, but we don’t have that information,” Barclay said, noting human challenge studies in other coronaviruses show a correspondence between declining levels of antibodies and susceptibility to infection. “That suggests antibody levels are a good correlate of immunity over time,” she said. Even if T cells or antibodies do confer immunity to coronaviruses, protection is not long-lasting.

As to what this might mean for COVID-19 vaccines, Cooke said, “The big picture here is that after the first wave of infection there was not much protective immunity. So the need for a vaccine is still very strong. The data here doesn’t change that need.”

The data also says nothing about the immune response to the various vaccines in clinical trials, most of which are adopting a two-dose regime.

Vaccines in development are using a range of different approaches to elicit an immune response. Barclay said it is not a given that the immune reactions to these various technologies will be the same as the natural immune response.

By the end of May 2020, more than 200 tests for detecting SARS-CoV-2 antibodies were available or in development. To select the lateral flow diagnostic used in the REACT study, the researchers assessed 11 tests from different manufacturers, both for accuracy and ease of use, in 276 health care professionals who had previously tested positive for the virus with gold-standard polymerase chain reaction tests.

Self-reported results based on a finger-prick blood sample were compared to results of laboratory testing with both whole blood and sera. The specificity analysis was performed on 500 pre-pandemic blood samples.

A total of 6,500 lateral flow tests were carried out in the assessment. The test, manufactured by Fortress Diagnostics of Antrim, Northern Ireland, that came out on top in the comparative home/lab study works in ten minutes. No additional equipment is required and the test can be stored at room temperature.

Over the three surveys, there was considerable variation by geography and across different age and risk groups. Antibody prevalence was higher in London, which bore the brunt of the first wave, higher in young people, in people of black and Asian ethnicity, those from larger households and in health care workers. That is in line with the data on PCR confirmed infections, which the researchers say can be read as a reflection of the accuracy of the Fortress test.

In the 18-24 age group, antibody prevalence of 8% in July fell to 6.4% at the end of September. The 65 and over age group had a lower prevalence in the first survey and a proportionally bigger decline over three months.

People in the surveys (there was a different population sample in each case) who tested positive were asked when they thought they had been infected. This showed that while the infection rate in the general population dropped off sharply following U.K. lockdown on March 23, there was a long time span of getting infected, and a slower decline in antibody prevalence, in-home care and health care workers. That may point to repeat exposure, the researchers said.

To date, only a handful of confirmed cases of reinfection have been reported worldwide. Barclay said that is likely to be because of the difficulty of proving there has been a second infection, with the recorded cases based on sequencing viral DNA from both infections.

Taken overall, the researchers suggest the evidence from this large population-level survey means there is little prospect of reaching herd immunity in the absence of an effective vaccine.

“We are a long, long way from the population being protected. Ninety-five out of 100 people are unlikely to be immune,” said Helen Ward, professor of public health at Imperial College.

Barclay agreed. “We’re miles off. This brings into question whether or not we can ever reach herd immunity with this kind of infection,” she said.

This news story was published by BioWorld. Click here to read the original article.