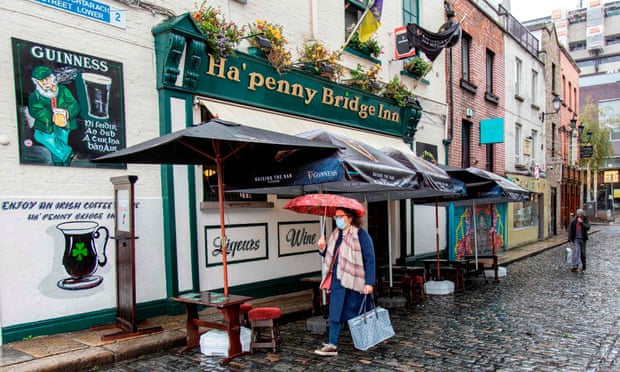 Pubs, cafes and restaurants will be allowed to serve takeout meals only. Photograph: Paul Faith/AFP/Getty Images

Ireland is to close much of its economy and society in a second Covid-19 lockdown that imposes some of the severest restrictions in Europe.

Non-essential shops will close and people are asked to stay at home, with a 5km (3 miles) travel limit for exercise, to curb surging infection rates, the government announced on Monday evening.

From midnight on Wednesday, the country will move to its highest lockdown tier for six weeks. Visits to private homes or gardens will not be permitted and there are to be no gatherings except for tightly controlled weddings and funerals.

A graduated fine system for those who breach the 5km travel limit – with exceptions for work and other purposes deemed essential – will be announced later this week. People who live alone or are parenting alone can pair with one other household as part of a support bubble. Two households can meet outdoors within the travel limit. Public transport will operate at 25% capacity.

Non-essential retail will close along with barbers’ shops, beauty salons, gyms, leisure centres and cultural amenities. Pubs, cafes and restaurants will be allowed to serve takeout meals only, a devastating blow to an already weakened hospitality sector.

In a sombre address to announce the restrictions the taoiseach, Micheál Martin, said he understood there would be disappointment, loneliness and despair but that there was hope.

“If we pull together over the next six weeks we will be able to celebrate Christmas in a meaningful way … the journey will not be easy but the future is in our hands. We must each dig deep and persevere.”

Martin said the government had rejected a strategy of zero Covid as unrealistic and a strategy of herd immunity as unethical. Periodic lockdowns may become the norm, he suggested. “We work to suppress the virus when it is growing, and we work to reopen as much of our society and economy as possible when it is safe to do so. Until we have a safe vaccine, we must continue in that pattern.”

Schools and creches are to remain open but Martin Marjoram, the president of the Teachers’ Union of Ireland, said his members were anxious, and more rapid coronavirus testing was needed for schools to remain open.

Construction and most manufacturing can continue operating. Hotels and guesthouses can remain open to supply essential services.

The pandemic unemployment payment is to be restored to €350 (£320) a week for those with prior earnings of €400 a week and above. Wage subsidy rates are also to be improved.

Supermarkets and grocery stores across Ireland reported unusually busy trading on Monday even though they will remain open.

Health officials reported 1,031 new infections on Monday, bringing the total since the pandemic began to 50,993. The death toll remained unchanged at 1,852.

Ireland’s 14-day incidence rate per 100,000 population is 261, less than Britain’s, France’s and Spain’s, and around the middle of Europe’s table. But Ireland’s health service has little spare capacity, especially for intensive care.

The chief medical officer, Tony Holohan, requested a level 5 lockdown two weeks ago but the coalition government rejected the recommendation, citing the damage that it would inflict on the economy and state finances and expressing hope that level 3 restrictions would contain the virus.

Leo Varadkar, the deputy prime minister, accused Holohan and his emergency health team colleagues of not thinking through the recommendation. Several ministers said a second lockdown may lack the social cohesion and widespread public compliance of the first.

However, with virus numbers spiralling, Holohan got a different response when he again requested level 5 last weekend, prompting some to say Varadkar had gone from Dr No to the Yes Minister.

Two days of intense talks between health officials and leaders of the three ruling parties, Fianna Fáil, Fine Gael and the Greens, led to the decision to return to a draconian set of rules similar to those imposed in March.

Holohan appealed to the public to get back to basics and to self-isolate if they had symptoms of Covid-19 or were waiting for test results or had tested positive. “Self-isolation means staying in your room, away from other members of your household. If you live in a house with a confirmed case, do not go to work or school. You must stay at home and restrict your movements for 14 days,” he said.

Health officials cited the example of a person who did not restrict his movements after returning from abroad, leading to the infection of 56 individuals in 10 households.

The highest infection rates are in counties bordering Northern Ireland, which has some of the UK’s highest rates. Last week Northern Ireland closed schools, pubs and restaurants in a set of new restrictions to last four weeks, with the exception of schools, which will shut for two weeks.

The divergence in rules between north and south, especially over schools and travel, will amplify calls for an all-island response.