Covid-19 – New restrictions for parts of England likely next week. 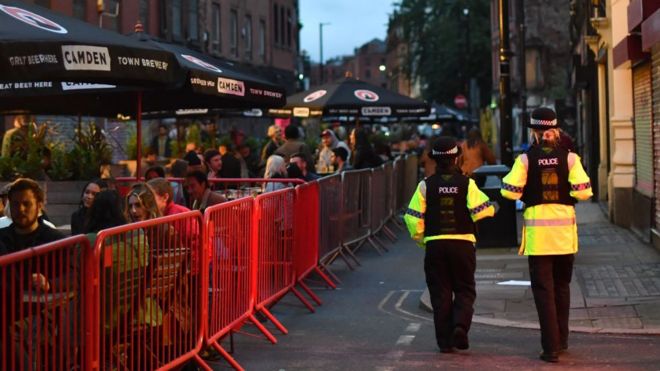 Covid restrictions are to be further tightened in parts of England early next week, with the closure of pubs and restaurants a possibility in the worst-affected areas, the BBC has been told.

There could also be a ban on overnight stays away from home in these areas.

A final decision on the time period or extent of potential closures has not yet been made.

The government is also likely to introduce a three-tier system for local lockdowns.

Under the system, different parts of the country would be placed in different categories – although ministers are still discussing the precise details of the toughest level of restrictions over the next couple of days.

A formal announcement is not likely to come until Monday, according to BBC political editor Laura Kuenssberg.

Meanwhile, Labour leader Sir Keir Starmer has challenged the government to publish the scientific evidence behind the 22:00 closing time for pubs and restaurants – and refused to say whether his party would vote in support of the measure in Parliament next week.

Communities Secretary Robert Jenrick said there was “evidence hospitality plays a role” in spreading the virus.

But pressed on whether the government would publish this evidence, he told the BBC: “It is commonsensical that the longer you stay in pubs and restaurants, the more likely you are to come into contact with other individuals.

“The more drinks that people have, the more likely that some people are to break the rules.”

He added that it was right to “take action decisively, rather than waiting for the most detailed epidemiological evidence to emerge”.

On the possibility of additional restrictions for some parts of England, Mr Jenrick said the government was “currently considering what steps to take” and the precise measures for different areas would be announced, “in the coming days”.

He did not rule out pubs being closed but said measures would be “proportionate and localised”.

He added that the government was trying to give “greater consistency on rules so they’re easier to understand” and was working on “slightly broader canvases of regions or cities and counties to avoid differences in people’s daily lives if they drive over the border”. 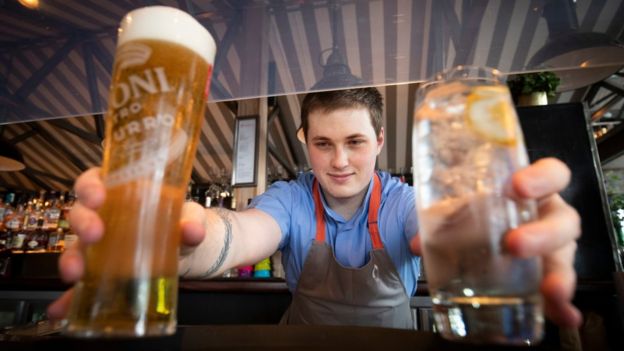 PA MEDIA: Image captionPubs and restaurants across Central Scotland have already been told they will have to close.

It comes as significant new measures are introduced in Scotland.

From Friday, all pubs and restaurants across central Scotland, including Glasgow and Edinburgh, are to close, while in the rest of Scotland hospitality venues must shut at 18:00 BST and alcohol can only be served outdoors.

Industry leaders are warning the measures could be the final straw for many businesses.

On Wednesday the number of UK cases rose by 14,162, with a further 70 deaths reported.

The planned tightening of restrictions in parts of England follows rising infection rates across much of the country, with medical leaders warning the NHS is at risk of becoming overwhelmed.

Liverpool, Manchester and Newcastle upon Tyne have the highest infection rates in the country.

A government source told the BBC the situation in the north-west and north-east of England was “very troubling”, with growing numbers of hospital admissions and more elderly people in intensive care.

These areas will be placed into the top tier of restrictions, with an announcement possible as early as Monday, in a new system called the Local Covid-19 Alert Level.

But there remains a debate within cabinet over how far the restrictions in the top tier should go, with some in No 10 arguing for measures like those in Scotland.

The plan is for schools to remain open in all circumstances.

The Labour mayor of Greater Manchester, Andy Burnham, reacted angrily to the reports, tweeting: “No discussion. No consultation. Millions of lives affected by Whitehall diktat. It is proving impossible to deal with this government.”

It’s a complicated equation. The Department of Health is worried about the spread of the disease, as well as other patients losing out on other treatments because of the focus on Covid-19.

No 11 is fearful about the impact on the economy, which has already had a profound shock.

And it’s No 10’s job to worry about all of it, then reach a conclusion.

But Boris Johnson also knows that his own MPs and the opposition parties are more and more sceptical as each day passes about what the government proposes.

It’s clear that shutting pubs and restaurants is a possibility – the “circuit breaker” that we have talked about on here lots of times.

But there are many questions still to be settled.

Under the new system, all areas would be subject to the current England-wide restrictions, but there would be much more robust measures for the top tier – the one with the highest infection rates.

There are already tighter restrictions in parts of the north-east and north-west of England, Birmingham and Leicester, where the rate of infection has been rising.

But there are currently no extra restrictions for hospitality venues in these areas beyond those in force nationally, such as the 22:00 closing time for pubs and restaurants.

The Treasury is looking at providing financial support to the industry in the worst-hit areas, and a memo seen by the BBC shows plans for additional money for local authorities. They would get £1 per head of population if placed into tier two, and £2 per head for tier three.

Kate Nicholls, chief executive of UK Hospitality, said if venues were forced to close the industry would need a return to a full furlough scheme and additional financial support.

She said the £40m of support announced for hospitality venues by the Scottish government, when shared between 16,000 premises, equated to just over £2,000 each, which “barely keeps the lights on, let alone saving jobs”. 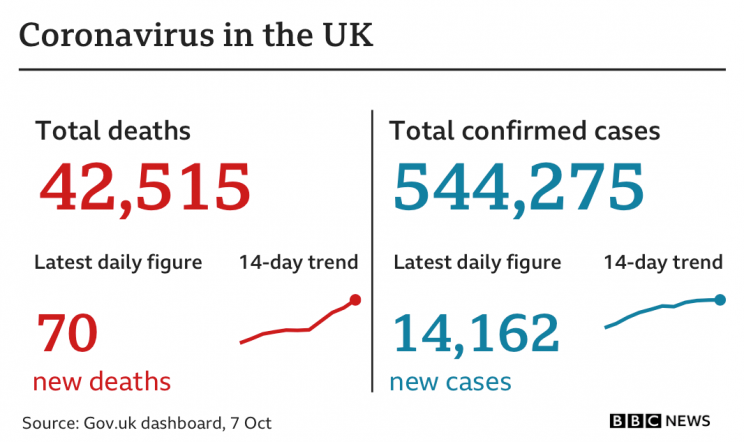 The planned changes come as medical leaders warn that rising infection levels across the country could leave the NHS “unable to cope”.

The Academy of Medical Colleges, which represents the UK and Ireland’s 24 medical royal colleges, called on people to abide “strictly” to coronavirus measures to prevent NHS services from becoming overwhelmed.

Helen Stokes-Lampard, chair of the academy, said: “Given the recent dramatic spike in both the number of cases and hospital admissions it is clear that we could soon be back to where we were in April if we are not all extremely careful.”

She told BBC Breakfast that while there were hotspots in the north-east and north-west of England, a lot of cities were now seeing “serious problems” and the virus was “working further south”. 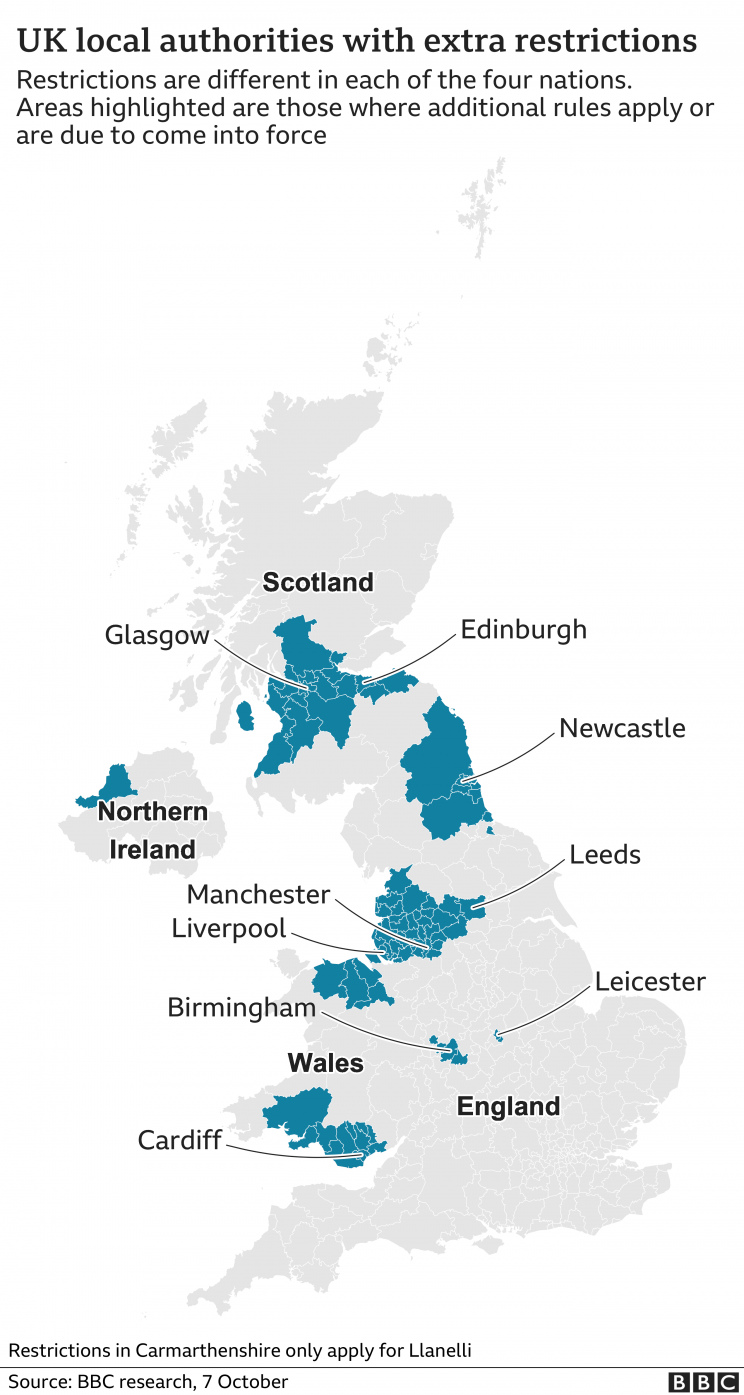 This news story was published by Med-Tech News. Click here to read the original article.

Covid-19 – New restrictions for parts of England likely next week.