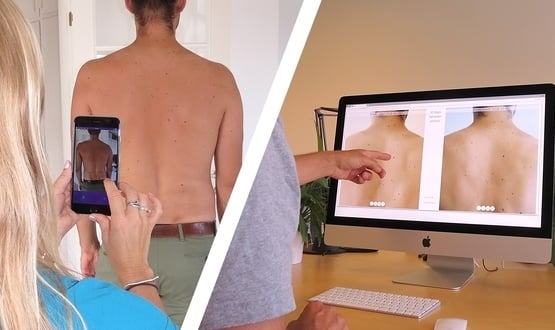 Apps that allow patients to keep photographic records of their skin and track changes over time are viewed by dermatologists as important tools for self-monitoring for skin cancer, according to new findings.

The Skin Health Alliance 2019 Dermatologists Survey found that 93% of 245 dermatologists said keeping photographic records of moles and wider areas of skin was a good way of monitoring for changes.

Half (50.7%) of those surveyed said mobile apps could be useful tools for enabling this.

With more than 140,000 cases of skin cancer now diagnosed in the UK every year, dermatologists say regular skin self-examinations by high-risk patients are important to detect early changes to their skin.

The survey also revealed that 98% of dermatologists believe it is important for patients at high risk of skin cancer to regularly perform skin self-examinations to detect early changes to their skin.

One in 10 people in Britain says they take photos of their skin to keep track of moles, according to independent research commissioned by Miiskin, which recently received independent dermatological accreditation from the Skin Health Alliance.

The Miiskin app, which has recently been awarded funding from the European Innovation Council, has been created to help people digitally track how skin and moles look, with reminders to routinely check for changes.

Those who spot changes are encouraged to seek advice from their GP or specialist.

The company has been working with the British Skin Foundation to help raise awareness of the importance of self-examination.

Jon Friis, founder and CEO of Miiskin, said: “The app is designed to support patients to be more aware of changes to their own skin.

“We’re working hard to facilitate what dermatologists are recommending and are encouraging people to take photographic records of their skin over time, to support early detection of changes in moles and marks.”

In September, Erasmus University Medical Center in the Netherlands reported that an app designed for the early detection of skin cancer had a 95.1% sensitivity in detecting the most common forms of the disease, concluding that it could prove “a valuable tool for early skin cancer detection.”

Called SkinVision, the app also allows users to take photographs of skin lesions and uses a machine-learning algorithm to determine the risk of both melanoma and non-melanoma cancers.