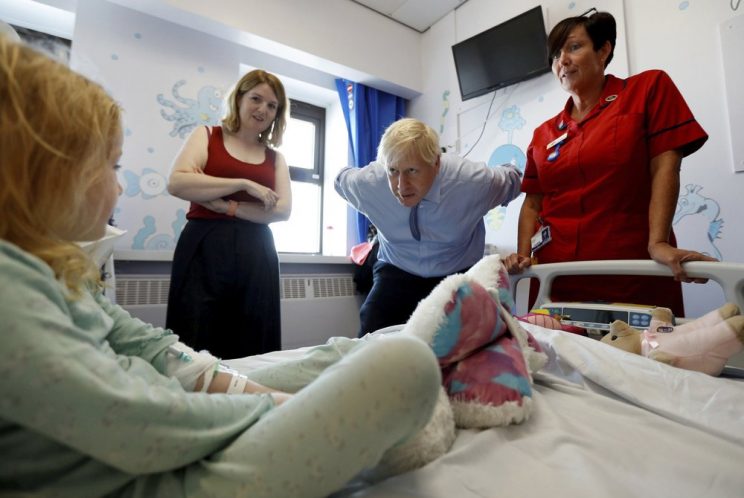 LONDON (AP) — Britain’s government plans to call a summit of social media companies to discuss what more they can do to fight online misinformation about vaccines following a spike in measles cases.

Although plans for such a gathering were still being worked out, Prime Minister Boris Johnson expressed concern Monday at the rising incidence of measles. He said Britain had a great record in fighting the disease but things were suddenly “going in the wrong direction,” with 230 new measles cases in the first few months of this year.

“I’m afraid people have been listening to that superstitious mumbo jumbo on the internet, all that anti-vax stuff and thinking that the MMR vaccine is a bad idea,” Johnson said while visiting a hospital in southwestern England. “That’s wrong.”

Social media companies have struggled to combat fake news of all sorts, from political propaganda to bogus warnings about vaccines such as MMR for measles, mumps, and rubella.

Though anti-vaccine sentiments have been around for as long as vaccines have existed, health experts worry that anti-vaccine propaganda can spread more quickly on social media. That can push parents who are worried about vaccines toward refusing to inoculate their children against various diseases, leading to their comeback.

Pinterest, a leading online repository of vaccine misinformation, took the seemingly drastic step in 2017 of blocking all searches for the term “vaccines.” Facebook, meanwhile, said in March that it would no longer recommend groups and pages that spread hoaxes about vaccines and that it would reject ads that do this.

But anti-vax information still slips through. That includes soundly debunked notions that vaccines cause autism or that mercury preservatives and other substances in them can harm people.

Some companies, such as Twitter, don’t have policies against misinformation, so anti-vax propaganda wouldn’t be against their rules. But to counter such material, Twitter said U.S. and U.K. users who search for information on vaccines get a government information site first from their respective countries. In the U.K., this is the National Health Service.

Of course, for people already distrustful of the government when it comes to health information, this might not do much.

Experts say that besides combatting bad information, people need to be given science and evidence-based data they can trust and understand.

Measles is highly infectious and health officials say at least about 95% of the population must be immunized to prevent outbreaks. In May, Public Health England estimated that about 87% of children aged five had gotten both doses.

According to the World Health Organisation, there were more reported measles cases worldwide in the first six months of 2019 than in any year since 2006, “with outbreaks straining health care systems and leading to serious illness, disability and deaths.” The U.S. has reported its highest number of measles cases in 25 years.

Some British health officials welcomed Johnson’s proposal but said the country’s health service was already struggling to cope with existing demands. Helen Bedford, a professor at the Institute of Child Health at University College London, noted that numerous doctors’ clinics were closing and the number of health workers in the country had dropped significantly recently.

“This is a system under pressure,” she said in a statement.

Johnson set out plans to improve the U.K.’s vaccination rates, calling for health leaders to renew efforts to ensure that 95% of residents have had both doses of the MMR vaccine. The Department for Health will deliver a strategy to address the issue this fall and is expected to consider using technology to identify who may have missed a vaccination and to make booking appointments easier.

This news story was published by APNews. Click here to read the original article.