Tech traps UK teens in mental health crisis — can it save them? 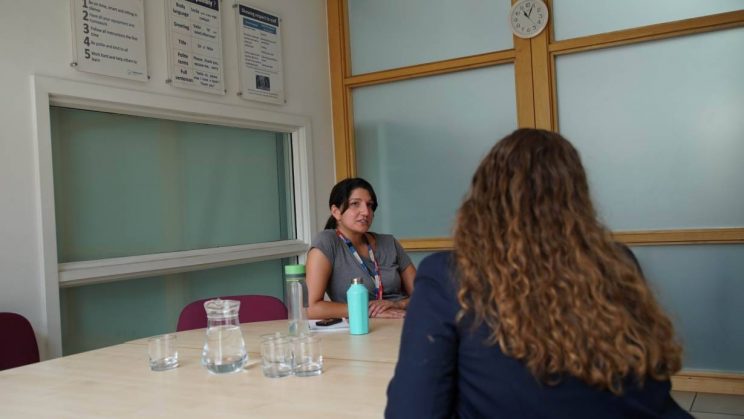 LONDON — For the British teachers grappling with a mental health crisis in the classroom, running a suicide watch or rushing psychotic pupils to hospital can increasingly fall into a day’s work.

Staff in three London schools recalled a roll call of pupils almost lost: the girl who gulped down pills, another set on jumping off a balcony and the countless teens who needed help to stem their self-inflicted bleeding.

“There’s been children who have been intentionally trying to walk out in front of cars in the morning and we’ve had to pull them back,” said one school staffer with 12 years’ experience.

“The child is hearing voices, says they don’t want to live, can’t focus in the lesson, is curled up crying in a ball. So at that point we are like, ‘Right, you need to go to (hospital) because you need some help’.”

In interviews with the Thomson Reuters Foundation, staff in overstretched schools said they had dealt with students as young as nine who Googled suicide, worried about body image and received unsolicited photos of penises.

Mental disorders are set to become one of the 21st century’s defining global health challenges, with patient numbers soaring at a potential global cost of $16 trillion by 2030, according to The Lancet medical journal.

The government has vowed to do better given some children wait two years for help as demand rises while services shrink.

But with new initiatives — some in school, others digital — professionals said they are now treating more children, reaching more minorities and, crucially, catching them all earlier.

Self-harm tripled to 20 percent among women aged 16 to 24 in England — usually by cutting or overdosing — between 2000 and 2014, the Lancet Psychiatry journal said last month.

“The earlier you intervene the better,” said Lynne Green, a psychologist who has worked with children for 20 years.

“Once belief systems take hold, it becomes really difficult to turn them around. The longer they sit there, they almost become part of the self, part of who I am, and individuals feel it is impossible to change.”

From September, schools in 25 trailblazer areas will have National Health Service (NHS) teams on site to help students with minor mental health issues and refer those in urgent need.

The government also funds Kooth, an online service that provides information and counseling to 70,000 children a year, while phone apps like BlueIce and TalkLife support young people in the privacy of home.

This generation is the first to grow up with smartphones, and juggle greater academic pressures with overarching worries about climate change as well as everyday anxiety over friends or fitting in.

Nearly one in four girls in England aged 17 to 19 has a disorder such as anxiety, depression or mania, official data shows, and most of them have attempted suicide or self-harmed.

“It was quite unusual to see the under-11s presenting with the more complex mental health disorders. But I am seeing much more of that now, particularly with respect to things like eating disorders and self-harm.”

The NHS gives free talking therapies to more than 1 million adults with depression and anxiety each year. It is now offering similar treatment to students in school, rather than in clinics.

This cuts stigma and boosts the level of parental consent, said Becky Maharaj, an NHS staffer working in London schools. She said almost 80 percent of her patients are from ethnic minorities.

“There’s a correlation between the level of social anxiety we are seeing and isolation,” Maharaj said, as all forms of communication move ever more online. “It’s very unnatural.

“Whereas in real life, they can just make mistakes and say silly things … rather than this constructed reality.”

Jane was so anxious about making mistakes at school that she studied incessantly, banging her head on the desk in tears, and often refused to go in at all. Other days, her mother drove her to the gate for staff to escort her in, crying.

“I didn’t really want to open up about it, but once you start, you actually can’t stop,” said the 13-year-old, who has since faced her worst fears and survived a detention, taken up basketball and now spends more time talking to her mother.

“You have that weight lifted off your shoulders … before I’d just sleep a lot. Now I’m more energetic. And I feel like I am just a different person.”

The NHS aims to reach one in four schools by 2023 — a target that health professionals say lacks ambition.

It is technology that offers the most revolutionary promise.

TalkLife is the most popular app globally for young people to talk about mental health, with more than a million users, most of whom have never sought help before, said Jennifer Russell, chief operating officer.

“The power of social connection and bringing people together when they are struggling is the most protective factor that exists when someone is suicidal,” she said.

“You can come on to a platform like TalkLife and instantly see that you are not alone.”

TalkLife — which has raised $1.8 million from investors seeking a social impact — uses artificial intelligence, developed with Harvard University, to predict whether users are likely to attempt suicide or self-harm so it can intervene.

Online anonymity also attracts teenagers who are scared of going public — Kooth counselors slowly won the trust of a girl being groomed by a drug gang and persuaded her to call police.

“Most of those who are self-harming aren’t actually having any help from any services,” he said.

In September, Stallard starts a trial, part-funded by the NHS, to monitor BlueIce’s impact and see if it cuts the number of kids rushed to accident and emergency (A&E) services.

“If it prevents just one episode of attendance at A&E, it’s saving huge amounts of money,” he said. “It provides a low-cost way of reaching large numbers of people.” — Thomson Reuters Foundation

This news story was published by Saudi Gazette. Click here to see the original article.

Tech traps UK teens in mental health crisis — can it save them?