MMR vaccine: one in seven five-year-olds in England may not be immunised. 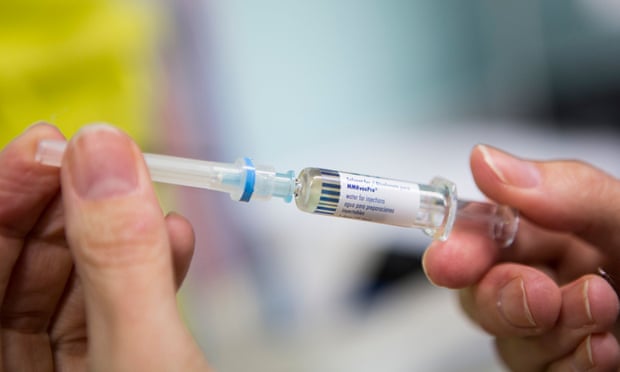 One in seven five-year-olds may not be up to date with their MMR immunisation, Public Health England has warned, rising to one in four in London.

Measles cases have been rising across Europe, where many families have been on holiday. There have already been 230 cases in England in the first quarter of the year. Doubts about the jab, fuelled by anti-vaxxers, have spread across social media. The World Health Organization has withdrawn the UK’s measles-free status because of the outbreaks.

PHE has revealed that about 30,000 children are starting primary school next month with no protection against measles, mumps and rubella, while 90,000 have had only the first of the two vaccines necessary for protection. It follows the prime minister’s announcement that he will urge social media companies to do more to combat misinformation disseminated across the internet about vaccine safety.

Boris Johnson is not backing compulsory immunisation before primary school, however, which has been adopted in a number of European countries including France and Italy. But the health secretary, Matt Hancock, has said it is something that should not be ruled out. The prime minister instead wants GP practices to promote catch-up vaccinations for children who have missed the routine MMR jab at 12 months and the pre-school booster.

“The UK generally has a great record on fighting measles, but for the first time we’re suddenly going in the wrong direction,” Johnson said on a visit to a hospital in Truro.

“I’m afraid people have just been listening to that superstitious mumbo-jumbo on the internet, all that anti-vax stuff, and thinking that the MMR vaccine is a bad idea. That’s wrong. Please get your kids vaccinated.”

The numbers of children having the four-in-one booster against diphtheria, whooping cough, tetanus and polio has also fallen. About 100,000 (around one in eight) five-year-olds in England are thought not to have had the jab, which is normally given at about three years and four months, said PHE.

Dr Mary Ramsay, head of immunisation at PHE, urged parents to check their children had had the full set of vaccinations. “It’s a real concern that so many young children – as many as a quarter of a reception class in some areas – could be starting school without the full protection that the NHS childhood immunisation programme offers for free. We know that parents want the best protection for their children and so many may be unaware that their child is not up to date,” she said.

“We’re particularly concerned about children being at greater risk of measles. We’re continuing to see outbreaks of the disease occurring in communities across the country, many linked to visiting European countries over the summer holidays. It’s crucial that children have maximum protection as they begin to mix with other children at the start of their school journey.”

More than half a million children in the UK were not vaccinated against measles between 2010 and 2017, according to a recent report by Unicef.

Measles is one of the most infectious organisms known to humans. To ensure the safety of children who cannot be vaccinated because of damaged immune systems such as after childhood cancer, 95% of the population needs to be immunised with both doses of MMR. Just 87% now get both jabs.

Prof Heidi Larson, director of the Vaccine Confidence Project at the London School of Hygiene & Tropical Medicine, said: “With more than 5% of five-year-olds in England not having had their MMR vaccination when they start school, and the UK losing its ‘measles-free’ status three years after being certified for measles elimination by the World Health Organization, it is time for more urgent action.

“I applaud the prime minister’s initiative and his recognition that this is not only a matter of service delivery, but also restoring vaccine confidence.”

This news story was published by The Guardian. Click here to see the original article.

MMR vaccine: one in seven five-year-olds in England may not be immunised.